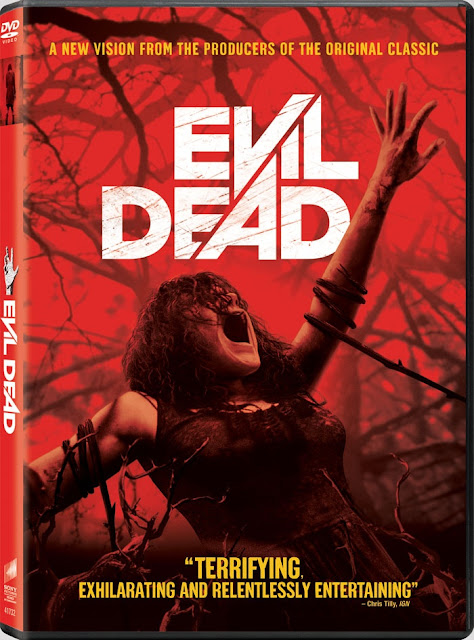 (OLD REVIEW THAT SHOULD HAVE BEEN POSTED MONTHS AGO....)

I figured I should start a fresh new chapter to the world of TF zine other then album reviews....movie reviews! I figured why not, as I am a avid movie watcher and see so many over time that I thought, hell, it be a good time now then ever to cover my own personal thoughts on each one I see. Being, this is my first review, for a movie that I hold very dear to my black heart, it is a reboot of the original, but I had to throw my 2 sense out there about it since I feel so strongly about the series. The movie is called, EVIL DEAD!!!
Co-written and directed by Fede Alvarez. Sam Raimi did NOT direct this movie but after watching it, you will feel like he did.


Alright, I know you all seen or love the story from Sam Raimi's cult classic, being it is with Bruce Campbell as the protagonist of the story, Ash Williams. I feel this movie is as far away as possible from the original, and that is not a bad thing, that is a good thing. The story starts off with 3 girls and 2 guys, reminiscent of the 1st movie, and also opens with some very crazy opening that leaves you twisted at what will happen next. Swallow Your Soul!!!

Yeah, they still say that in the movie and is said right at the scene where the old man was originally in the cabin in the first place started this whole mess, ended up burning his daughter to a stake with some voodoo witch that helped by reading the Necronomicon to cast her to hell or whatever the demon came from before the bitch swallowed his manhood. Now, he blows her head off, after the guys knock her out in the woods, and she is burning and screaming, pretty twisted opening, you almost fall for it at first, her talking in a whining normal tone to her Father, pleading for help, but you can see it a mile away she was going to turn to the dark side. Then comes the Evil Dead logo and the bababummmm!!! epic opening. It really kicked off the movie well. Now lets get to the flesh! 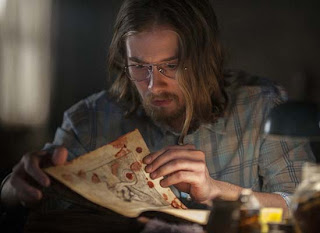 The whole story, is good, but has some flaws. Some of the actors just do not cut it I think as far as playing the new roles for this reboot goes. I can say this nerd here with the glasses kept the whole movie alive and pretty much carried the movie along the whole time, so I find him to be the best of the bunch. Eric was the best actor there I believe. David, Eric, Mia, Olivia, and Natalie (DEMON???) go to a cabin for I am not sure of what reason, then manage to keep their friend Mia there long enough before she starts withdrawing from her addictions, and then she finally ends up losing her cool and getting raped by some trees in the process of escaping her car after wrecking it in a hysterical fashion. The way the movie goes on kinda reminds me of the Ring, the way the demons look in the beginning, but then again these are demons, not ghosts, and they are very gory surprisingly. They come into the scenes to jump at you pretty well. The part where the bug or slime that goes up Mia's *coughs* pussy was not something I was expecting.

The girls of the movie, I thought held up for some of the movie when they were demons, but other then that, their acting was pretty over exaggerated and could have been better thought out. David on the other hand, he was the worst of the bunch and I hate to spoil most of the ending but I was SO glad he died, he was the man to play a role which was reminiscent to Ash I felt, but did terribly, and I later found out Mia was the one who ended up being the "badass" of the flick taking down the demons after she came over her possession after David kills himself to kill Eric (nerd with glasses) from killing them after he turned into a demon towards the end of the film. The acting was I can say....ALRIGHT, compared to the first original flick. Now, lets get to the book.

The Necronomicon or, Naturom Demonto, the Sumerian language for Book of the Dead, has had a total reboot, and fresh new look compared to the past books with the scary faces. This one actually looks pretty legit, and the inside looked amazing. I was really impressed with how the book looked and how they wrapped it up to hide it. It was one of my favorite parts of the movie, and the books pictures/text/blood stained messages really made a difference. Without it, and just having another plain old scary face looking book, would not have been the right thing to do I think. The stitching opposed to the face look held up pretty well.

What I can not stand about fans of Evil Dead is that if it is not a film with Bruce Campbell it is not a Evil Dead movie, but in essence, it is a Evil Dead movie, FEELS like a evil dead movie, and I say, a pretty good one. But that is not to say it is without its flaws just like any other horror movie does. The RAINING blood scene, I did not understand, and also the scene where the girl Olivia is taking charge while everyone is freaking out, I can't stand her actually, Elizabeth Blackmore is her name I believe, I think she did horrible in the movie and was a bad choice to be put in it. I really wish they had a old tape recorder in the movie which played some dialogue of the old man from the beginning of the first movie when he killed her daughter, but that was not something you seen or heard of in the movie either.

I seen the R version of this film but plan to see it again when it hits blu-ray/unrated. The movie just jumps right into the action it seems and their really is no initial build up or scare in the woods that moved or followed long enough to actually make you say, RUN! or keep you on your toes. The action just went from gory to goriest and kept rolling on, but had little as far as intelligent acting went. I can say the first movie was not intelligent when I first saw it, but this was even worse then that. The acting just was sort of a hard thing to watch. I mean, I seen bad, but this seemed like they put in a bunch of actors that were ready to get a grammy for best horror movie of the year and they just did not get the right people for it.


At least the first movie kept you on your feet more at times before something really bad where to happen. The demons were also pretty cool looking, and the ways Mia played with their heads was also hilarious and entertaining. Gimme a kiss you whore! That part made me laugh pretty hard. Maybe a throwback to the slapstick parodies I have not seen since Evil Dead 2, especially since Raimi and Campbell were part of this in production. 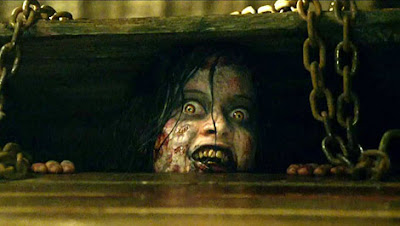 Anyway, if I had to rate this flick I rate it a 7.5 out of 10. I wish I had time to complete this review thoroughly but I have put it on hold for months and had some decisions to make, which will be explained in my next monologue. Overall the film lacks some strong points, and at times made me go, WTF!!! but otherwise still stood strong to its roots and kept me interested long enough till the end credits where Ash also made a cameo appearance at the end. It is really worth a watch but beware of some of its accidental mishaps.

I decided just, the other day, that this site, TF zine, for the future will be dedicated to everything horror related. I am not sure about music and the bands and all anymore. I might just make something new in a blog for that eventually. I will also relocate all my old blogs here PROBABLY to that site as well once it is up. Just things like this take time you know....so bear with me. TF ZINE will be back, but will be promoting a whole different medium to itself, but similiar to the music I posted here for the past 2-3 years. Movies!!! So until then, the zine is officially closed!!! Till next time. ~Danny